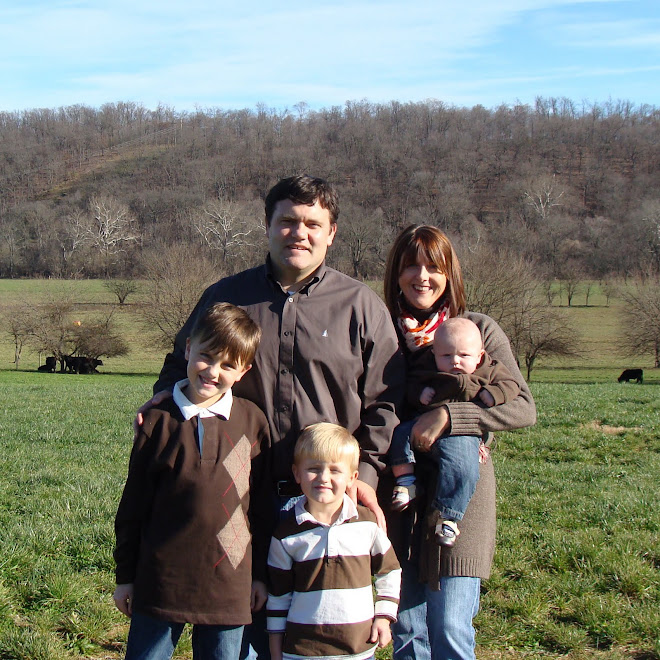 Swimming with Fearful and Fearless

A friend of mine and I decided to take our kids "somewhere fun" since it was their last day of school. It was actually her idea, and her family really, really wanted to go swimming. She has 4 children, ages 7, 5, 3 and 4 months. So, you could say she had her hands full (but she handled everything quite nicely!), but I felt like I was going to have my hands full with Thomas (the Fearful) and Toby (the Fearless), nevertheless, I thought I had to give it a try...it's going to be an awfully long summer if we don't get out and do some fun things every once in a while.

You see, Thomas, not surprisingly, has been quite fearful of the water. He had gotten a lot "better" last summer, but it has been almost a year since he has had the chance to swim. Playing in the mudponds at Playmobil FunPark does not count! So I did not know what to expect from him and how demanding he was going to be of me.

Then, there is Toby, last year, he didn't really like the water, but I thought it was mainly because he thought the water was too cold. I had no idea of what to expect; except the worst!

I have to say, I was pleasantly surprised to see that Thomas really did pick up right where he left off...as long as he is wearing the water wings he is not afraid and had a great time! I was also pleasantly surprised to find out that Toby really doesn't care for the water. Not that he was afraid of it and trying to climb up my legs when he got near it, but he was perfectly content to walk around "the beach" of the wave pool and get wet up to his ankles! I am quite OK with the fact that he isn't wanting to dive in or go off the diving board at the age of two!

One humorous aspect of my first time swimming at a German swimming pool: the dressing room is Unisex. Yes, you read that correctly. Although, the dressing room itself has lots of private dressing stalls (which we used), my friend told me she has seen more naked men in the dressing rooms of swimming establisments while living here in Germany, then she ever wanted to in her whole life! I didn't see any naked men and that didn't hurt my feelings.

Last Day of School for Thomas!

Today was Thomas' last day of school. He passed Primary and will be onto Grade 1 in August! His class had a waffle party that morning and his neat teacher put together a cute slide show of the children. It was funny to see how young they all looked at the beginning of the school year. Thomas said good-bye to his teacher, Natalie, who moved back to the States the very next day. She was a great teacher. He gets eight week off and goes back on August 21st.

Today, I was at a friend's house, when all-of-a-sudden it got too quiet. Her older kids were around, but Toby and her 1 1/2 year old were not. She said, "I have a feeling they are outside." and ran outside...sure enough, they had gone outside, crossed the street and were walking down the sidewalk about three homes down the street. When we yelled out their names, they turned around and looked at us like "What? We're going for a walk!"

They say a cat has nine lives...I'm not sure how many Toby has, but he has certainly had some close calls lately! He's dangerous, I tell ya!

Toby has no fear. Well, he doesn't exactly like being left with a babysitter but besides that, he really is fearless. To the point that he is scary. Take tonight, for instance...I was busy cooking dinner, Thomas and a friend had been playing in the back yard with Toby and decided to go to the park next to our house. Thomas is 6, his friend is 8 so them going by themselves is OK, after all, it is right next to our home.

So, I was cooking dinner and assummed that Toby was in the back yard playing. Mind you, I had the radio on, two fans on, two pots of water were boiling so I very easily missed the sounds of Toby opening our front door and going outside (he did not shut the door, or I would have known he had gone out). So, he went down the stairs, into the street and walked to our park. I was at the sink peeling potatoes when I saw him walk past my car. The big boys went to the park and that sounded like a good idea to him, too!

I usually lock the front door with a key from the inside but it wasn't locked because the big boys went through the front to go to the park. They can no longer go around the side of the house from the back to get to the park because I've put up a fence to keep Toby in the back...and safe. Safe and Toby...it's not working out so well.

Last night, right before the boys' bedtime, a pretty serious rain and thunder storm rolled in. Toby was absolutely terrified and we had a hard time getting him to go to sleep. I had to rock him for a while, while the thunder rumbled and the lightening struck all around us.

He turned to me and said, "mean rain, mean rain, da rain is nauny (naughty)"

How quickly "What's dat?" has been replaced by "Why?" in our conversations with Toby. And he says it with such sincerity, too, that's what is so cute about it...but it has still gotten old. 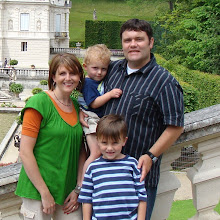 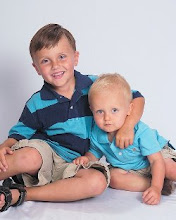 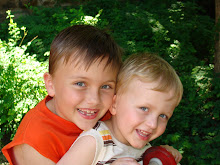